Coach Virgil is Academy’s longest serving youth coach and has been instrumental in developing the club’s football program since 2008. Virgil earned his CONCACAF ‘D’ License in 2012 and is currently Academy’s Technical Director and coach for the U11 Boys team. He has experience coaching all age groups at Academy and has coached Academy teams on many international tournaments including the Dallas Cup, Disney Youth Cup and USA Cup in Minnesota over the past 10 years.

He was the Head Coach of the Cayman Islands U15 team in 2015 and is a former Cayman Islands national team and club player. He has also played competitively in Canada where he also coached a school team. In 2018 he was recognised with a Heroes Day award for his contribution to sports.

Coach Paul has been a youth coach at Academy for the past 10 years, initially coaching the U13 team and now head coach of the U18 boys and Mens First Division teams. He is Head of Youth Development at the club, overseeing its youth football program. He received a COERVER youth coaching Diploma in 2012 and earned the CONCACAF ‘D’ coaches license in 2013. He coached the Cayman Prep primary school’s teams in the PFL team for 6 years and has also been coaching Cayman Prep’s U13/14 Boys team in the Dart high school league for the past 3 years.

Paul served as an assistant U15 National Team coach for the Cayman Islands in 2015 and has also served as assistant Coach and Team Manager for the U20 Men’s National Team in the CONCACAF U20 Mens’ Championships. Paul has coached various Academy teams overseas over the past 9 years at the Disney International Youth Cup in Orlando, the USA Cup in Minnesota and the Miami Cup. In 2018, he was recognised with a Heroes Day award for his contribution to sports.

Coach Kris coaches Academy’s U13 boys, U15 Boys, and U13 Girls teams. He has a UEFA B Coaching license. He has been coaching football for over ten years, collecting a diverse range of experiences both in the UK and abroad.

In 2016, Kris left the north of England and relocated to Bahrain to fulfil a role with Arsenal Soccer Schools, during this time he also founded expat football club, the Janabiyah Juggernauts. After two years in the Middle East, Kris returned to the UK to complete an undergraduate degree in Sport Business and Coaching, whilst coaching the U16’s in Manchester City’s Girl’s academy and supporting coach development as an FA Coach Mentor.

Coach Martin coaches Academy’s Under 11 Boys team, and serves on the board of Directors of Academy Sports Club.

Coach Fabian has been a volunteer coach for the past 6 years coaching boys and girls teams from U11 to U18. Fabian has also played for the Academy men’s team and holds the CONCACAF ‘D’ license.  This year Fabian is coaching the U9 team.

He is a UEFA B licensed coach with over 12 years of experience. He has coached at clubs and academies in Portugal, South Korea and Thailand. Before joining Academy, he was the Technical Director of a British football academy in Thailand and was also the founder of the school Football Academy of Basis International School of Bangkok, and mostrecently Wellington International College of Bangkok.

He also has some experience in club management, as he was President of a community club in Portugal for 6 seasons.

Before coaching, Coach Paulo played at a semi-pro level in Portugal, serving as the team captain of the University of Coimbra (one of the oldest European universities) 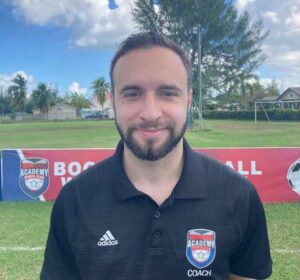 Nuno holds a UEFA C license, and started as assistant coach at the age of 16. He has been coaching for 8 years in clubs, academies and schools in Portugal and Thailand. Before moving to the Cayman Islands he was head coach of an English academy in Bangkok as well as the head of football of the Australian International School of Bangkok.

In Portugal he coached U15 boys as well as U19 girl teams in the Portuguese National League.